G'day folks, how's it going? Time for a wee update on what's been going on somewhere on the other side of the world (depending on where you are when you read this that is). This wee little backwater town they call Perth seems to have somehow inadvertantly become the place I've 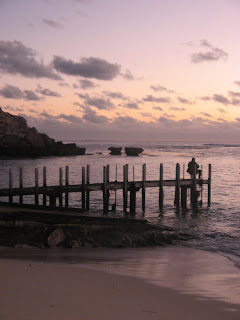 stayed for the longest time a) in about 2 years which is scary and b) without making one of those amazing chocolate puds - dad can I get the recipe??? - which is even scarier! (not that I'm always thinking of my belly) and c) means I've been able to slack off this blogging malarky.
Current activities have recently surrounded Perth's City to Surf run that's happening at the end of August, I'm fine with the 'city' element and happy with 'surf' - it's just the 'to' that's been bothering me of late... Believe it or not I've been running all over the place in the name of training (don't laugh) and you'll be happy to know that thus far I haven't been attacked by a pelican (few close calls mind), have been complimented on my socks (left green, right 'gold') and haven't seen sense yet. There are two races I could do, one's 12km the other 21km - I need your vote on which I do, pain or lots of pain? challenge or challenge to survive? Let me know here...
Had a mini road trip at the weekend down to Margaret River which is a major wine making region about 200km south of Perth. Went down with Ali (my scottish housemate - who is scandalously labouring under the impression that he's leaving 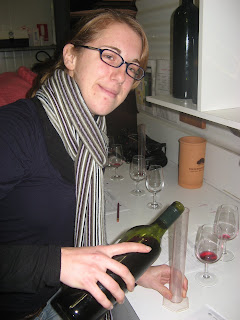 next week) and Mickael "i complain" Frenchy. Was awesome to get out the city and have a nice break (we were either driving for longer than I thought or it looked exactly like England, green fields and cows galore) and needless to say 'sample' lots of wine and even blend our own <*jo remembers why she failed chemistry as she accidently pours 50 not 5ml in the measuring tube, 'hic'*>, though we're not to talk about the chocolate factory (hrumph). It's a big surf destination down there and seeing as one of the reason I came to Oz was to get in some surfing, you'll be deeply impressed that I continued my good work and didn't touch a board (this is getting silly now - picture above). Frisbee made it out too, only to be immediately launched into the sea (tch), so was replaced with AFL ball (I'm soooo much better than those guys already, Ben Cousins eat your party heart out).
And in other news caught my first glimpse of dophlins in the Swan river whilst walking along in 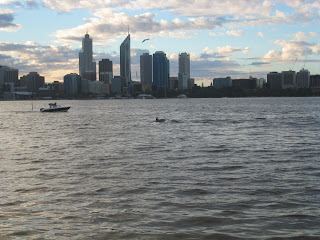 South Perth which was pretty exciting (I felt much empathy for the little kid who screamed whenever mummy and daddy suggested that it was time they went home instead of watching them) - if you get your magnifying glass out you might see a fin in this picture, as was the ride on the boat across the river that I didn't even realise existed (the boat, not the river) - would have saved me a lot of effort running if I'd known about it!
Harry Potter minus 2 days!!!! So EXCITED!!!
That's pretty much all I have to say right now - don't forget the decision lies in your hands: 12 or 21km - it's in the hands of democracy now...
Posted by Jo at 15:56:00 5 comments: