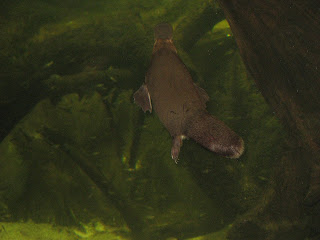 immigration when was told to "just step this way please..." Aaaaaaaaarrrrrggh! Fortunately just some 'routine' thingymcjiggy that they had to do. Made it past that hurdle only to be confronted with quarantine. Apparently this wasn't the time to be making flippant remarks about bullfrogs and the like. Even my best "I've been on a plane for hours and am really tired but think you're the most amazing person I've ever met" smile didn't allow me to queue jump the hoards of Thai's who were under the impression their shoes were poisonous (still don't really understand what was going on there), and all because I picked up a few shells on the beach in Thailand.

Anyways, a quick hop on the bus and I was in Squidney baby! (pic below 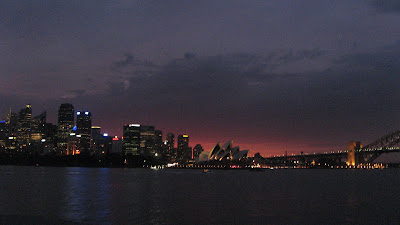 = Oz stereotype #5) were it not dark I would say that the sun was shining gloriously. It still is, yayayayay! Awoke the next morning full of life (it was afternoon) and went for a little explore. I pootled around the Squidney Aquarium with the duck billed platypusses (seen above, Oz stereotype #167), scary sharks, penguins and educational lessons (the difference between a croc and a 'gator is their teeth, when jaw shut croc shows both upper and lower teeth - I'm writing this trivia here so I don't forget it), and NEMO and friends!!!! It's pretty expensive here so don't judge me for being boring but it was free so I went to the National Maritime Museum and learnt all about ships of yore (and snuck into the pirates exhibit yo ho ho) 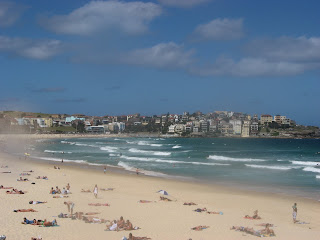 , also went to the IMAX movies for some 3D fun. Lots of other wondering around the place, sitting in people's chairs (who is this Macquirie dude that everything is named after? Google it for me someone will you) and looking at pictures (art galleries = free, yay, art gallery cafe = deffo NOT free, yikes). Pootled over to Manly on the ferry (young children came of use here when big wave threatened to splash me but being the kind person I am I said that young kiddo could stand in front of me so she got soaked instead, hahahahaaaaaaa) wondered around (walking = free, new pair of shoes = not so cheap, subsequent blisters = less amusing) and ate lovely fish n' chips on beach (preying seagulls at no extra cost). Went over to Bondi (pictured here, Oz stereotype #18) but all the surfers there were rubbish (read: not good looking enough) so wondered along the coast over rocks and through yonder whatevers and stuff for rest of day.

Aha, just realised I forgot to mention the exact reason why everything I did had to be on the cheap side of cheap. I lost my wallet. Thought it could have been stolen. Reported said loss to police. Cancelled all my cards. Went to sleep. Woke up next morning to message from police "wallet has been handed in", friendly dude didn't even take the cash out of it. Now have wallet complete with cards that don't work cos I cancelled them. Grrrrrr. Got replacement 'emergency' credit card at bargain basement price (ouch) that was such an 'emergency' it took about 5 years for it to get to me. Alas I'm not bitter. Much. 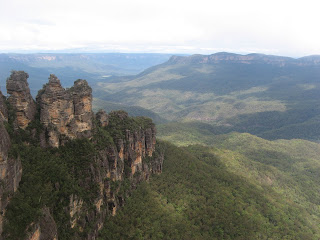 Well once all that palarva was sorted out I have finally made it out of Squidney (repetition of cute misspelling of name in hope that it catches on) and went up to yonder Blue Mountains avec huge car and tent with hideously bent poles that make tent laughing stock of campsite, it is being seriously bullied. Well here's a picture of the 'three sisters' but don't let that fool you into thinking that the view was nice fort he whole 2 hour walk that I did, oh nononono. Lots of clouds and not a lot of Blue or indeed Mountain seen at all (as seen on right of screen, behind perplexing image of myself), but fortunately after a handy application of Take That (have a little patieaaaaaaance) and Japanese tour group camaeraderie through the fog the clouds parted and 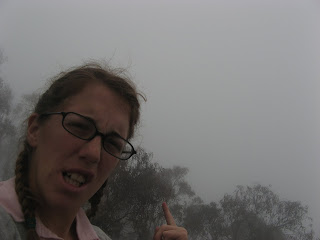 this vista was bestowed upon me, bet The Darkness never had this trouble (look up your MTV trivia). Now just driving around for a few days, will obviously keep you updated as to my whereabouts, but must go because this country is veeeerrrrry B.I.G. But not in the Tom Hanks way.


You'll never EVER guess where I am now, Thailand, again. It's still pretty nice, if you like that kind of thing. Obviously lying on a beach all day isn't really my cup of tea but sometimes sacrifices have to be made in the name of travel. (fire poi man below, inexplicable candle-eater man not pictured) 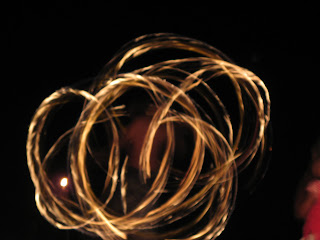 I think I do have to take the opportunity to publically voice a note of thanks to my beyond brilliance family for having me home for a wonderful Christmas (and 3 month run up to said day), I thoroughly commend their airport taxi service, the room not too shabby (could do with being a bit tidier mind) and the food (puds in particular) second to none (except - in a hushed voice - perhaps the food here, GIANT prawns, yum yum). I had a super time and molefo recommend it to anyone.


Well quick update on what I've done since leaving the home of all wonder, hopped back onto plane to Singapore to watch Pirates of the Carribean (I didn't fully understand what was going on mind), multiple episodes of Kath & Kim (revising for my next port of arrival) and other such funk. Quick footed it up to Bangkok and then down to sea sea sea. First stop Ko Lanta which weren't too bad, though pales in comparison to Ko Phi Phi (current home), especially as have gone posh (oh the benefit of having a partner in crime to share costs with). 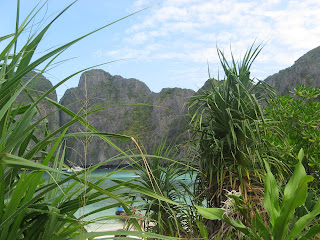 Has been a wee bit cloudy mind, but obviously, being british and all, first day sun came out got sunburnt, duh. Went on pilgrimmage day trip to mini Ko Phi Phi which is where The Beach was filmed, very nice but a bit crowded - think it would be worth a swedish shark attack/episode of craziness/scary gun-toting drug farmers to protect said haven (read the book). Here is shot of me pretending to be Leo DiCap, think I carry it off rather well... 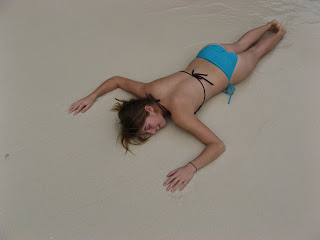 Also got to go to another beach a.k.a. paradise but could only stay for an hour, despite pleading with the boat man (why couldn't it break down again there?!?). 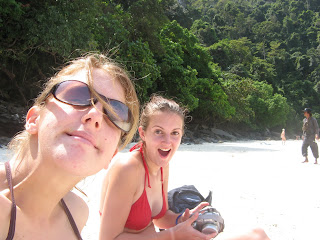 Ach, must skiadaddle, big coconut pancake and fruit shake is beckoning me, but will leave you with this: