Hey Blogfans, how rocks life? So, I rather left you 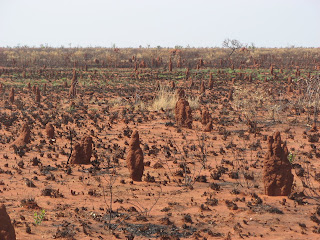 on a cliffhanger last time on my way to the city (town/street) of doom. Oh Katherine Katherine Katherine. But would you believe it this time when I saw Steve (grumpiest man alive) the mechanic he was actually able to hold a conversation without punctuating it with uncomprehensible grunts, he even smiled! Whether that had anything to do with the beer in his hand and giant wodge of cash I had just given him I wouldn't like to judge. And so 1 gearbox (possibly minus 5th gear) and 2 new tyres later ARNIE WAS BACK ON THE ROAD!!! Not wanting to miss the delights of Katherine I went to Woolies and bought some bread, apples and water (all the food groups represented there) and left. YEEHA!!! 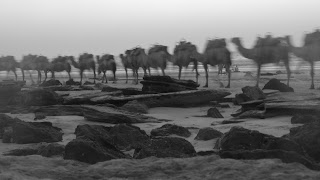 The next 3 days pretty much went like this: drive, sleep, eat, sleep, drive, eat, drive, sleep, eat... Broome was some distance away, I was too lazy to put up the tent, there were no showers, you get the idea... I STANK!! And then when I got to Broome and ran into the camp bathroom for a shower imagine my delight as the electricity cut out. NNAAARRRRGGGHHHH! Spent 3 days chilling out on the beach of sunsetty delights and recovering from the road (and mourning the death of the kangeroos I roadkilled - what if they were the last remaining breeding pair in Australia??? Oh the guilt! Actually one so wasn't my fault, I slowed down to drive past it and it continued to run into the side of the car - stupid animal). 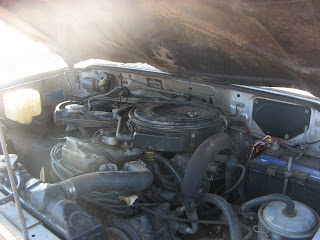 At this point I recruited some new drive companions in the form of Eric and Frank. Given that they were from Taiwan I suspect that these aren't their real names. I told them my name was Juanita Gonzales (ok I didn't cos I came up with the idea 2 weeks too late, but you get the idea). Alas with no money in our pockets it was drive time. Drive drive (camp in most fly infested place in world with resident enormous cow looking on) drive drive stop. Yes, STOP. FOR EVER. In the middle of NOWHERE (not really a surprise given that about 99% of WA is officially nowhere). Spent some time on the side of the road in 44 deg heat. That was nice. Chatted to a few miners on their way past who all wanted to help soooo much with the car situation by saying "hmmmmm, it's buggered mate". Thanks. 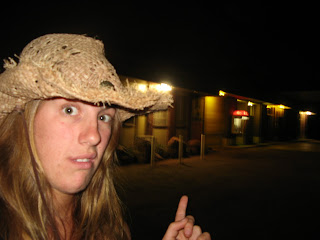 Managed to hitch a tow from a lovely bearded man to the nearest roadhouse. And I thought Katherine was bad. Entertainment in this place involved cockroach contraception (it's less dodgy than it sounds, involves throwing rocks at the copulating little minxes), eating raw noodles, hats (see pic, dismayed face included) and time delay photos (100's in fact), because the bus was 4 HOURS late (Benno - no worries man, the bus is just a few minutes late dude!). I had to get the bus to Perth. THE BUS!!!! The indignity. Members of the public and all. Tch.
Yes boys and girls I'm back in Perth, oh city of all Perthliness. 4 days later and I'm back at work (I'm on the Northern Development Taskforce apparently). YAY!!!! Actual yay because I am BROKE (I hate that car, the car is the bain of my existence, never buy a car, car sucks, rrrrubbish). The 'keep Jo's belly and bum sizable fund' is now open, chose your avenue of donation here... Oh and join me in sorting out my life and directing me where I should go next on the poll over here----> pick the right answer please! On that note I think it's time I had a drink. a big juicy cold beer. Adios!
Posted by Jo at 10:07:00 1 comment: