Ello blogfans! I know I know I know, it's been a while since I last reported on my misadventures. But lets get the obvious out of the way first - Merry (how depends on consumption levels) Christmas and Happy New Year: rock on 2008! So for a brief update... I finally landed in Perth after l o n g e s t smelliest mineriest bus journey ever and arrived in the rain at casa del Saul who generously offered me a floor to crash on (yikes 2 months later and I'm still crashing on that floor, whoops - and quite literally because Big W just DOESN'T sell airbeds that remain inflated for the duration of a night). Work's good - busy and scary sometimes - and they love me so much I was almost going to be here forever... if anyone knows anyone dodgy in immigration please pass on their contact details to them?

Perth remains to be Perth. The smallest city furthest away from anyway and VERY warm. 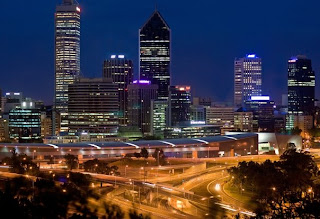 Much time has been spent attempting to crawl into the freezer (it's not as big as I might have hoped) and oscillating with my number 1 fan (I wish to hear no words from the air-con endowed population - needless to say after a Boxing Day in what was the hottest city in the world at 44 deg, I was a tad relieved to enter the climate controlled comfort of the office). What have I been up to? well I think it all went wrong from the time I crashed an IT party, a few guitar hero sessions later (rock juice gives you all kinds of ideas of coolness and grandeur that are nothing more than illusary) and I may well be a geek. Few trips to the beach and the burning hot sand and freezing cold (aahhhhhhhhhhhhh) water), the usual. 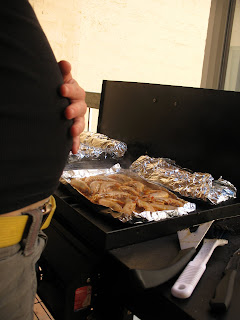 What does one get up to for Christmas in Australia? firstly it feels nothing like Christmas because I'm walking about town in shorts and looking at bizarrely decorated window dressings with snowmen in - just doesn't fit somehow... Well shock horror, one has a barbeque (delicious prawns pictured) and a cocktail party (with ones flatmates, thus not really a party, more just a lot of mojitos)! Yum yum in MY (slightly inflated) tum! And for New Years? One has (surprise surprise) a BARBEQUE!!! These Ozzies have it simple, but why change a formula that includes lots of sun, scrumptious food and a plethora of drink (not that I constantly think of my stomach)...

Oh and blogfans - don't think I'm taking this poll lightly, I have turned over my decision making authority (cos I can't make up my own mind) to the opinion of the majority (it could be interesting should there be a late surge for secret option d) because not even I know where that is...) Should you deem it really necessary to view pictures of some of my Perth people then your kicks are available from here.
Posted by Jo at 23:11:00 No comments: