on the 'other' side

G'day blogfans! How goes life? So the East Coast adventure has continued... Said a goodbye to Julia who had to fly back to Germany (ha ha unlucky) after a last night in Cairns in which I brutally mocked and laughed excessively at lots of slightly downbeaten fans of the Wallabies, HA HA HA (they've taken to blaming the rules of the game as the reason they lost). Then I got to experience one of my favourite travelling things - an overnight bus journey!!! YAY - how I've missed them... not.

Next stop Airlie Beach, the jump-off point for a trip around 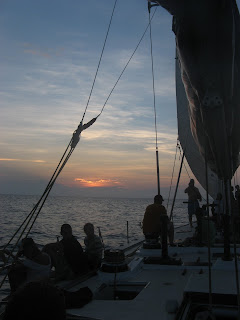 the Whitsunday islands. At which point I jumped off onto a maxi yacht thingy (I may pretend but I know nothing about boats...) which was apparently very fast and successful in its day (I suspect that now is not 'its day'). So we set off cruising around the lovely islands, chilling in the breeze and sleeping up on deck (the beds had a 'space' isssue, in that there wasn't any) under the stars. Hit another travelling top 10 moment as I got to steer the boat into the sunset (aaaaaahhhhh - though the picture doesn't do it justice, I was concentrating on driving) while the skipper laughed at my slightly unorthodox style (apparently writing my name in the water with the boat isn't what he meant by 'straight line')... Landed at 2nd best beach in the world (Australians, only 2nd best? astonishing), t'was a bit cloudy (of course, why wouldn't it be) so I took the opportunity to go for a 14km run on the 2nd best sand in the world with the sea licking at my feet (now why wasn't it like this for the marathon thingy) and GOT THE FRISBEE OUT!!!! Squeezed into my sexy stinger suit (damn this poisonous ocean) for a quick snorkel about more of the reef and generally cruised about. n.i.c.e.

Another joyful overnight journey took me to Hervey Bay, the jumping off point for Fraser Island the land of sand. Not surprisingly I got covered in sand. Everywhere. 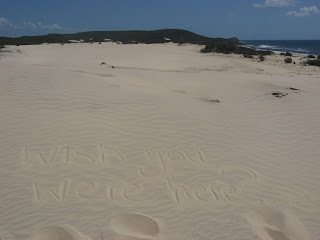 22 of us piled into 2 jeeps (do not ask me how we fit in, we didn't) that we weren't allowed to get sandy or wet or risk losing at least a million $$$'s - damn car hire, I miss Arnie!!! Alas first thing we did on the ISLAND MADE ENTIRELY OF SAND was get the car covered in sand, and then a little saltwater, who'da thought that possible??? Anyways, much beach driving and track driving and there's a big bruise on my shoulder to demonstrate how smooth the roads were. A little rainforest action, a little lake action (no swimming in the sea, yes it has sharks that will kill you just by looking at you and jellyfish galore), a little floating action, a little beach olympics, a bizarre pet dinosaur and lots of bizarre things that I cannot for the life of me remember at this particular juncture (probably best left on the island I think)...

Beautiful stuff, plus I finally drank the bottle of wine that I've been carrying around since Perth, not surprisingly since it has been heated up and frozen and cooked and chilled about a million 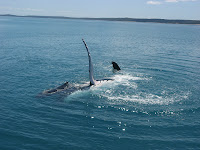 times it did not taste worthy of the effort put into carrying it. But enough of that. Went whale watching the next morning which was AWESOME, one even waved at me! In fact it was totally brilliant fantastic awesome mega cool. Fact fans: Did you know that a baby whale puts on 45-60kgs each day - that's like a whole me every day... sure makes me feel small... CRIKEY!!!! I went to Australia Zoo - home of Steve Irwin & co. An awesome day out as I got to pat a koala, feed kangeroo's, fortunately not feed crocs (they are BIG - up 7m! - and mean, especially when hungry), stalk emu's (ugliest bird in the world) and all kinds of other animal related things.


More photos of all things East to be found here (or again, and you wouldnt believe my cunning, but follow the link entitled East Coast Pictures ---->)...
Right, I'm off to hell (Katherine) now - IT SUCKS, adios.
Posted by Jo at 01:41:00 1 comment:

Picture fans I have added some more pictures of the great road trip should you follow the link bizarrely titled Road Trip Pictures Part 2 (how do I come up with these things?) or if you're feeling super lazy click here...

Will update shortly (tomorrow prob) - currently in Hervey Bay en route to Brisbane, more details later, but it's nice and I'm still alive, just...
Posted by Jo at 09:00:00 No comments:


We had to give in to evil Steve and get the Greyhound up to Darwin, arrived around 11pm, having our priorities well and truly in place we went for a 'quick' cold beer (this is becoming something of a common theme... hello Australia) t 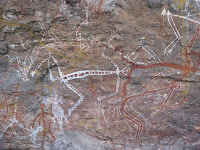 o celebrate, possibly returning in the early hours of the morning after some crazy dancing (zero gravity kangeroo jumps) and cocktails to celebrate the brilliance of not being in Katherine (maybe it isn't that bad I don't know, but there's something about that place that seems to bring people to attach bits of aeroplane to their face, surely that's not good?). After a slightly late checkout (in no way beer related - and why does my neck hurt so much? ah yes, the dancing, whoops) we had to lick our sans-Arnie wounds and go about the treacherous business of hiring another car (sob sob) to get to Kakadu NP; managed to procure a beauty on the promise that we wouldn't go off road with it, 모 ㅗ드 (sorry, this keyboard keeps randomly popping into Korean for no apparent reason) - ah hem.


Well Kakadu was erm, ok? Not the same without Arnie, who given the expense of the repair job ($2000 and counting, nnnnaarrrrgggh - Perth I may be back a little sooner than anticipated) is not in such good favour anymore, especially as had to leave all our camping gear with him so slept under the stars - this time nowhere near as romantic as it sounds because it was wet, fly ridden and I was much nearer the source of snoring than usual in the tent, grrrrrr. Saw lots of birds in a muddy pond that is somehow both culturally and environmentally significant a la the beloved W 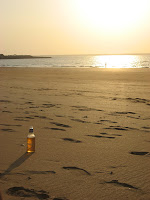 orld Heritage list. Saw some kangeroos fighting which was cool. They fight like girls. Saw some crocodiles, they were big and scary and not to be trifled with. Plus bizarrely went snorkelling in a cloudy waterfall also apparently with crocodiles, thank someone important that I didn't see one because otherwise the water would have turned purple! Listened to Mika a lot on this trip. A LOT: "this is the way you left me, I'm not pretending, no hope no love no glory, no happy ending, this is the way we love, like it's forever, spend the rest of our lives but not together (insert Mike like squeal here *aaaaaaaaaaahhhhhhhhhhhhhh*)" - will these words ever exit my head???


Back to Darwin for the soul destroying and devastating task of saying goodbye to Luka and Benno by sharing a beer at sunset on the beach accompanied by sand wrestling, full volume Mika (again), belly rubbing, bad video diaries and more manic dancing (rock on Darwin).


Have now made the bizarre decision given my 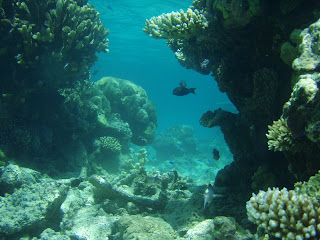 current bank balance ($600, could be interesting... tch, who needs food anyway, and milkshake, and accomodation? Baby Kate perhaps?) to head over East to Queensland and am currently in Cairns and just done a 3-day liveaboard dive of the Great Barrier Reef... It was super-duper wonderful, saw lots of fish and reef and sharks (night dive bizarrely between dinner courses) and glug glug glug. T'was awesome my friend. I'm now back landside trying to figure out how to travel several many km's with no money, any ideas???


nB. a jelarkodile is a vicious combination of a jellyfish (prevent swimming in Darwin), a shark (swam with in Cairns) and a crocodile (definitely no swimming in Kakadu). More pictures when Benno gets over his jetlag and properly copies them to a CD, nnaarrrrggh.
Posted by Jo at 07:09:00 1 comment: